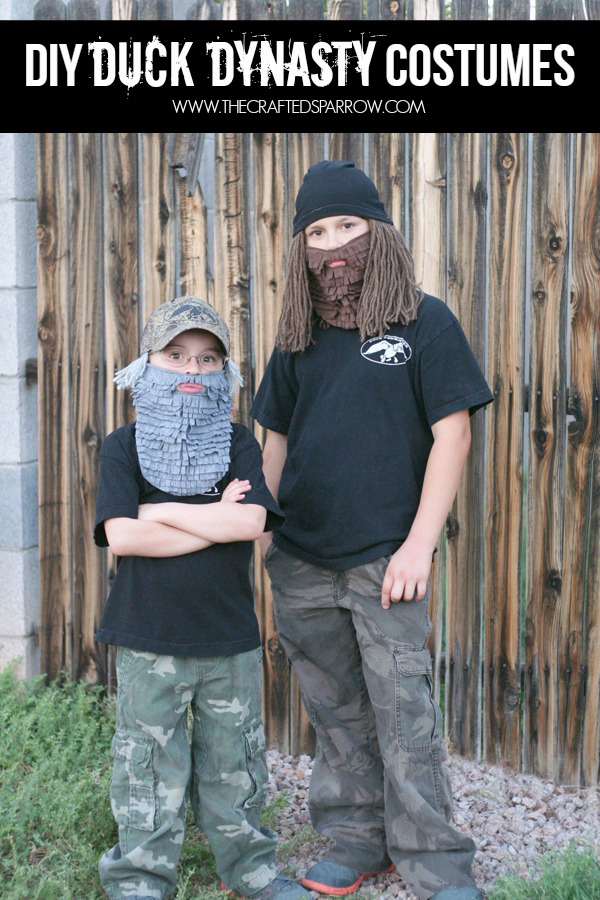 I’m super excited to be teaming up with Jamie Dorobek – from C.R.A.F.T. and her handmade Halloween costume site, Really Awesome Costumes to bring you guys tons of easy ideas to craft up DIY Halloween costumes for everyone including your pets, family costumes, and even a trunk or treat idea!  Along with my DIY Duck Dynasty Costumes, I’m sharing 88+ more really awesome handmade costume ideas from talented bloggers everywhere! I usually love to have my boys go in a team duo costume set for Halloween each year. They have been a Cowboy & Indian, Shark & Scuba Diver, and Robin Hood & Little John.

Since my boys love Duck Dynasty I thought Uncle Si and Jase would be a fun and easy duo to make.  These by far were the easiest costumes I’ve made to date, and both boys loved how they turned out. 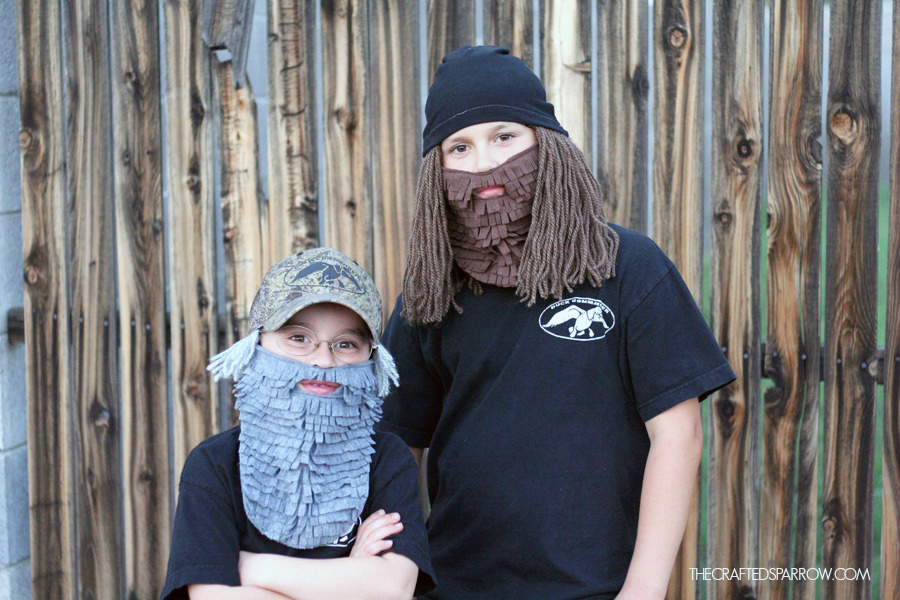 Other Accessories Needed for Uncle Si & Jase:
–  glasses (no lenses)
–  blue tupperware cup
–  ice tea pitcher
–  camoflauge pants
–  ducks (if you have them, you can always use decoys)

Let’s start with the awesome beards, for a template and directions on how to make them go HERE.  These were by far the most work on these costumes, but pretty easy to make. 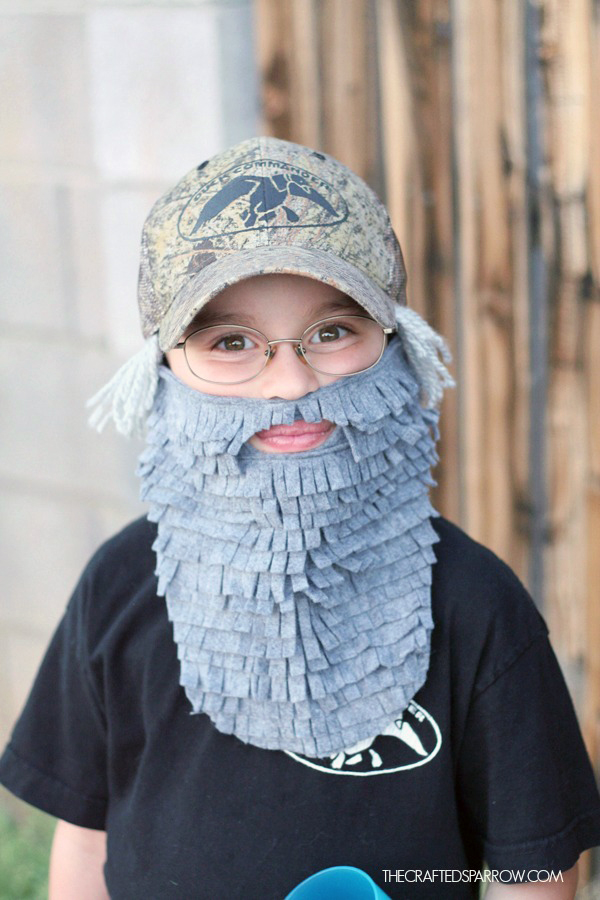 For the hat:  I found the camo hat at walmart for about $4.  I searched for a Duck Dynasty logo on google, and saved it.  I opened the image in my Cricut Explore cutting software and created a cuttable image with the logo.  With the hat I chose to cut the image on to vinyl so it would bend with the shape of the hat.  I then used a foam brush and black fabric paint to carefully stencil the logo on to the hat.  Let it dry before removing the vinyl. 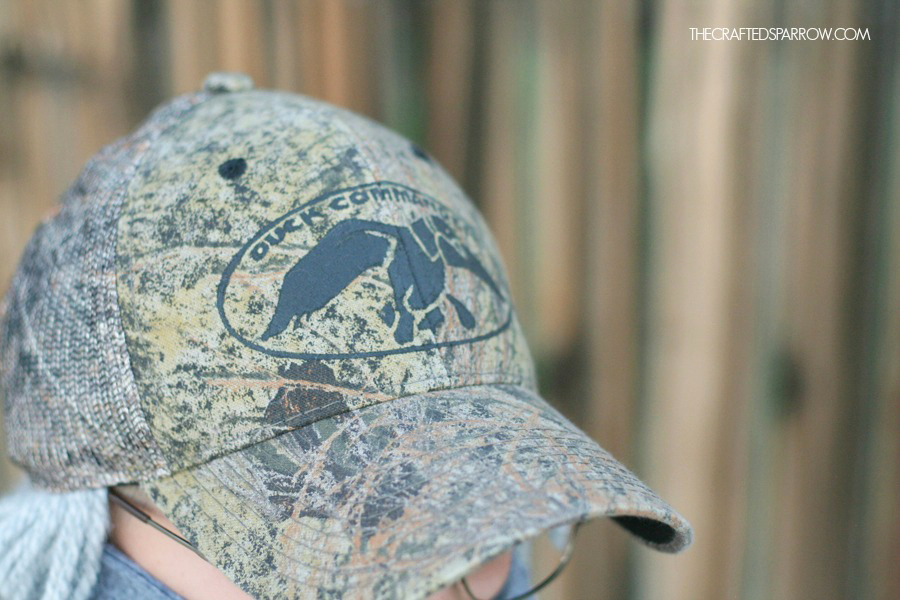 For the shirts:  I bought inexpensive black t-shirts from Walmart for a couple bucks each. Using the same logo as the hat I cut two more stencils.  With white fabric paint and a foam brush I carefully stenciled the design on to the shirts.  You will need to do several coats of white paint, when dry remove stencil. 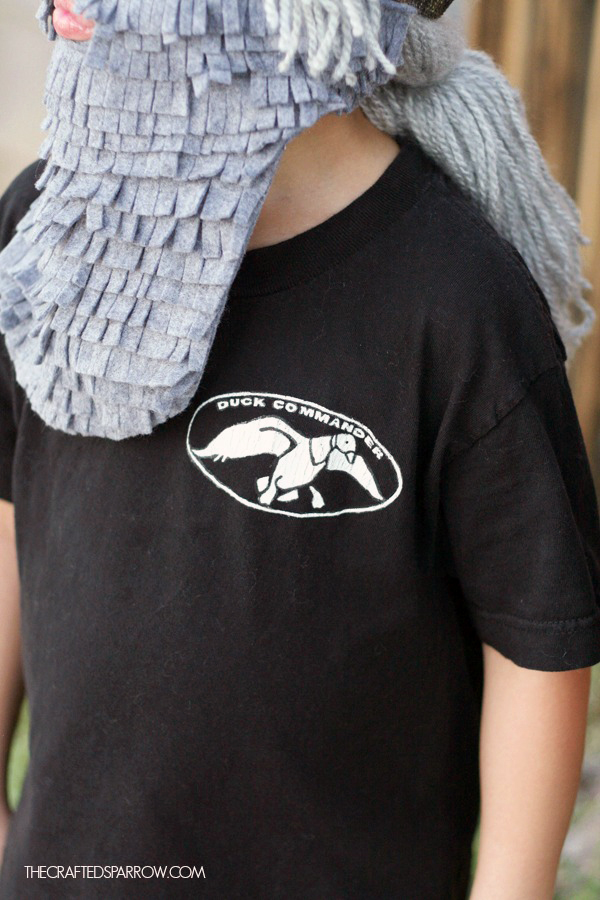 For the hair:  I basically hot glued a ton of yarn to a strip of felt to fit inside both hats (the camo hat & the black beanie).  I originally made both sets with about 14″ strands of yarn, you will give it a hair cut afterwards.  When you have enough yarn glued on the felt strips, take those strips and glue around the back and sides inside each hat.  Put the hats on your helper and carefully cut each wig to the length you want.  Uncle Si has mid-back length hair and wears it in a pony tail.  Jase has shoulder length and usually wears it down under his black beanie. 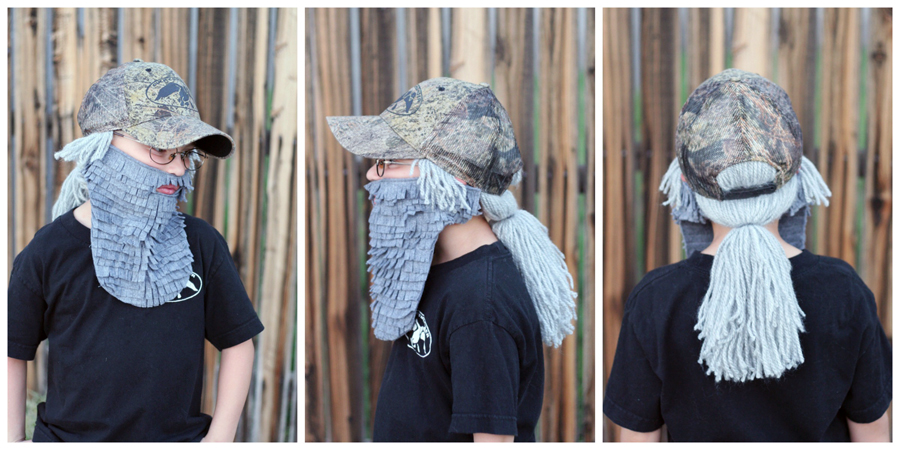 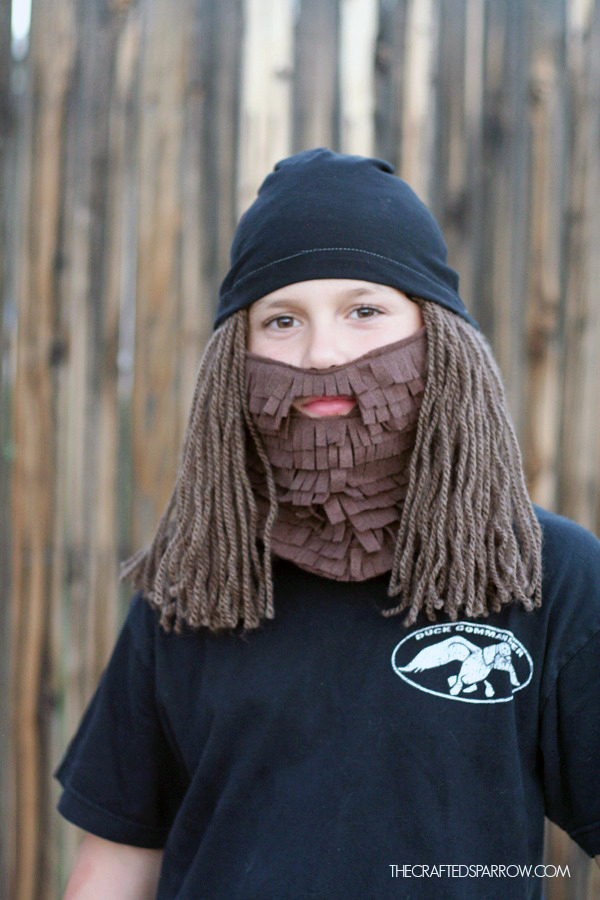 Head to your local Goodwill or thrift store and grab some camoflauge pants for a couple bucks.  Add the other accessories for Uncle Si like his infamous ice tea cup and pitcher, and a pair of glasses.  If you have any duck decoys those would be a great addition to this costume duo. 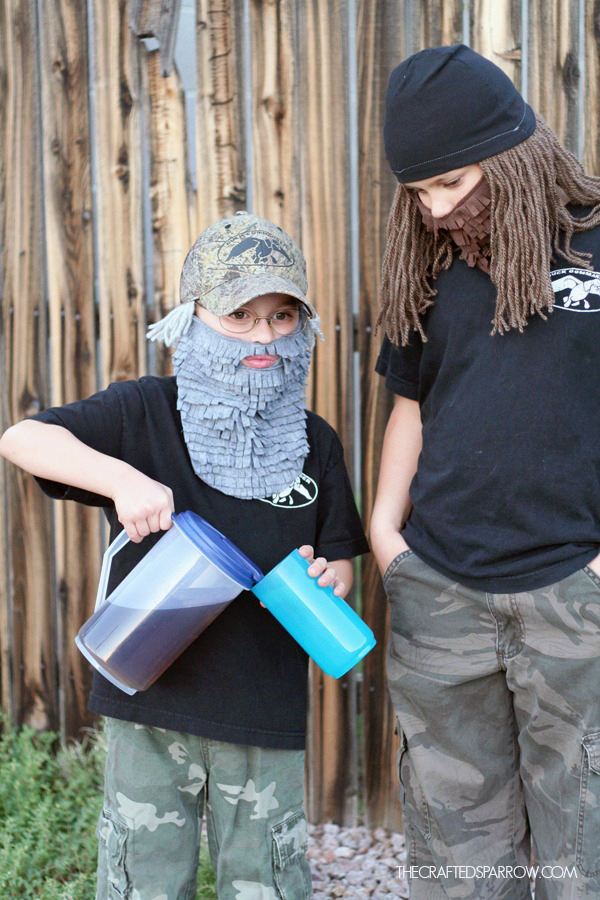 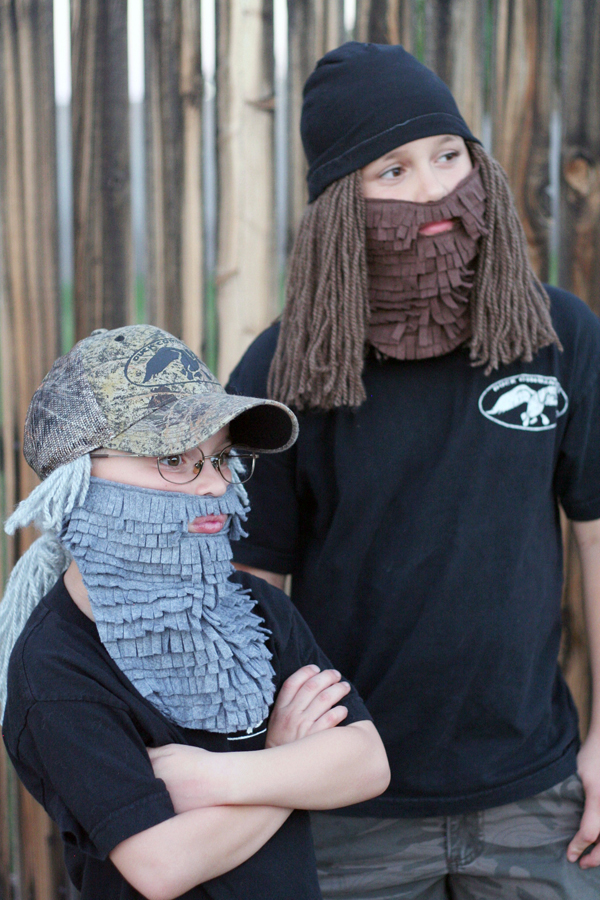 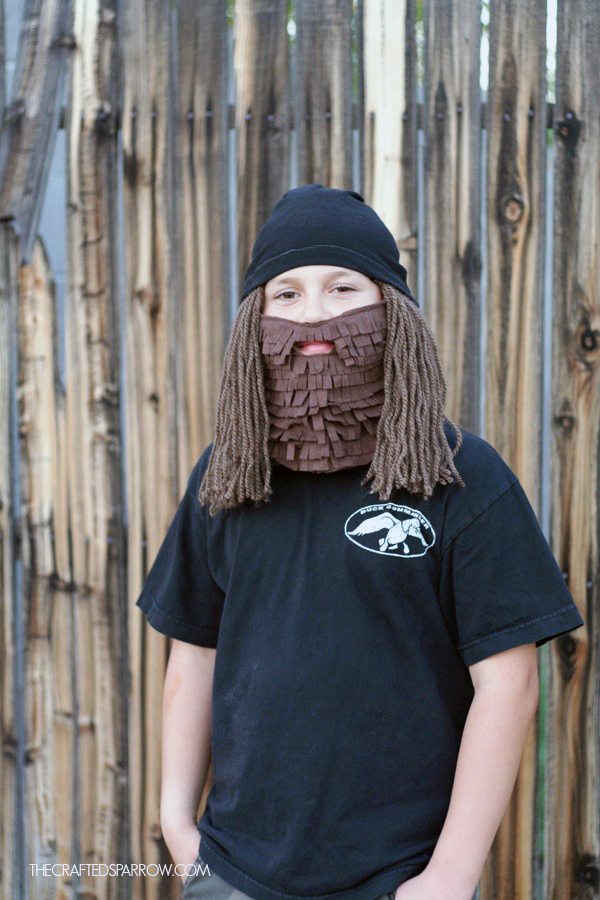 And now it’s time for tons more DIY Halloween costume inspiration! Join in on the BLOG HOP! Click on the links below each collage to get the detailed instructions about how to make the costume pictured, just like mine above. Don’t forget to follow the Handmade Halloween Costumes Pinterest Board for even more DIY costume greatness! What handmade costume ideas did you love the most?! Be sure to click over to get the costume instructions, pin the costume, and let them know you love it! Also, follow the Handmade Halloween Costume board on Pinterest!