This year I got a slow start on planning the boys costumes.  I love to plan a costumes for them that has a theme, I think it’s pretty fun that way.  Last year they went as a shark & a scuba diver, see HERE.  After lots of brainstorming my oldest put in his two cents and said he wanted to be Robin Hood & Little John!  I thought okay, that’s easy and I can totally pull that off in a week.

So off to several Goodwill stores I went searching for the some basics components of the costumes.  The rest I had to make myself. 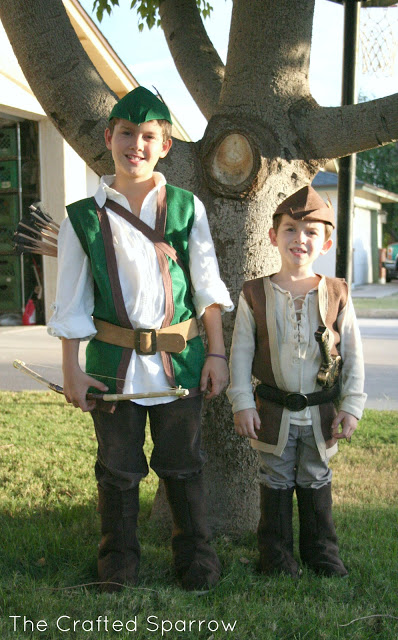 I was able to find Robin Hood’s shirt in the women’s department {size xs}.  It is obviously large on him but it sort of fit the style I was envisioning.  The neckline was perfect on it, it originally had buttons which I removed and then just sewed part of the shirt closed.  It also had some other decorative tabs I needed to cut off.

His pants were from the boys department and a little big on him, but for the price I couldn’t pass them up.  So I just hemmed them and he can wear them when he plays outside this winter.  The belt was also from Goodwill, I think it is vintage..but it fit the look I wanted perfectly.

I made their vests out of felt and some inexpensive cotton trim from Joanns.  To make the vest all I did was lay a tank top down on top of the felt by the yard I had purchased, I cut along the tank top leaving a 1 1/2″ to 2″ seam allowance, and I made it about 4″ longer on the bottom than the tank top.  I had two pieces of felt, one of which I cut straight up the middle for the front of the vest.  I trimmed the neckline in the shape I wanted and the arm holes.  I then just sewed the pieces together and added the trim.

The hat was made from a tutorial I found online, the link will be at the bottom of this post.

His arrow quiver was made from an old pvc tube that was originally for real estate signs, it held the flyer’s.  I found it at goodwill for a buck, covered it in brown duct tape from the dollar store and added a strap.  The arrows I made using dowel rods, I added small strips of paper that I cut to resemble feathers and hot glued them to the ends of the dowel rods.  I stuffed a couple squares of styrofoam in to the tub and then glued the ends of the arrows in to the tube so they couldn’t come out. His bow was made using a large stick they boys had found at the river several weeks before.  I whittled it, sanded it and then soaked it so it would bend a little…tied some twine to it and it was a bow.

I also made their boot covers out of felt. 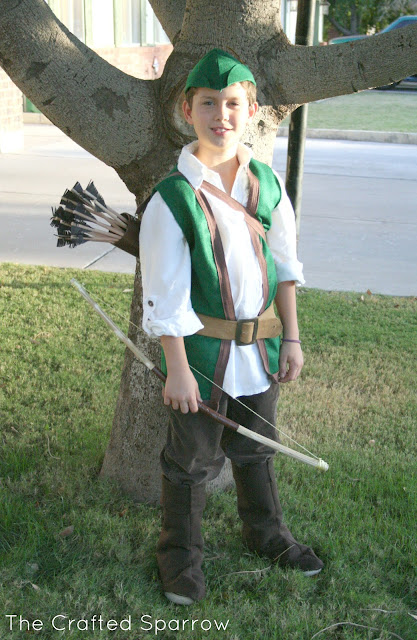 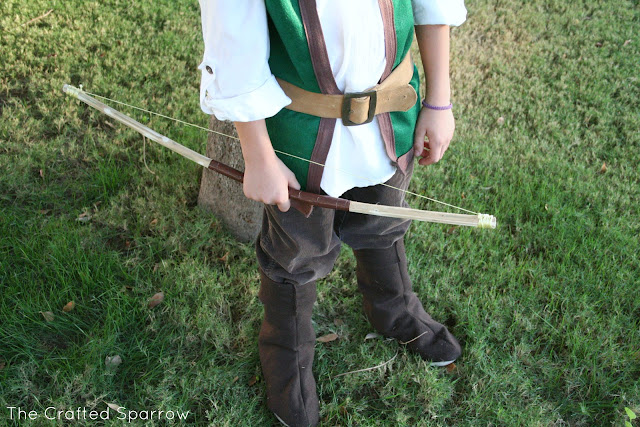 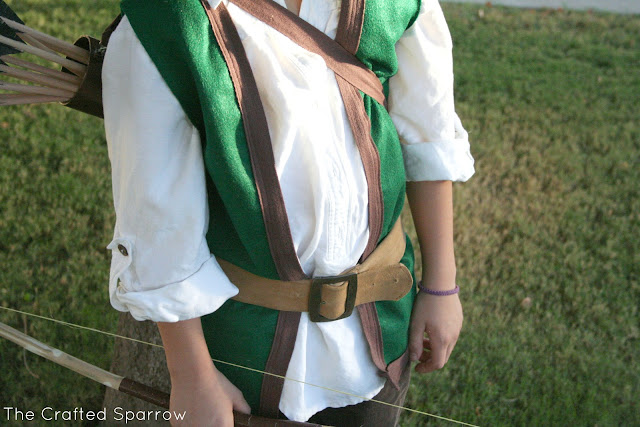 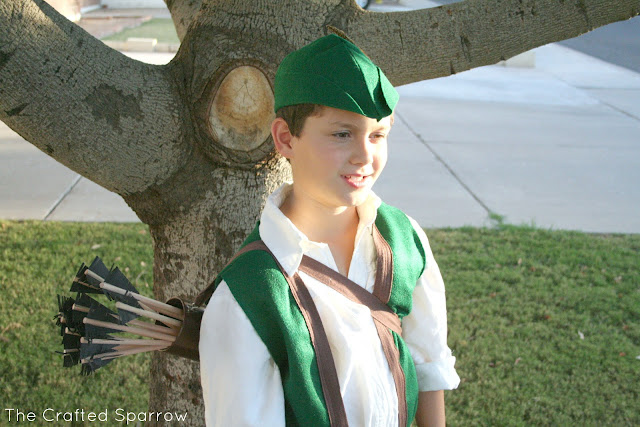 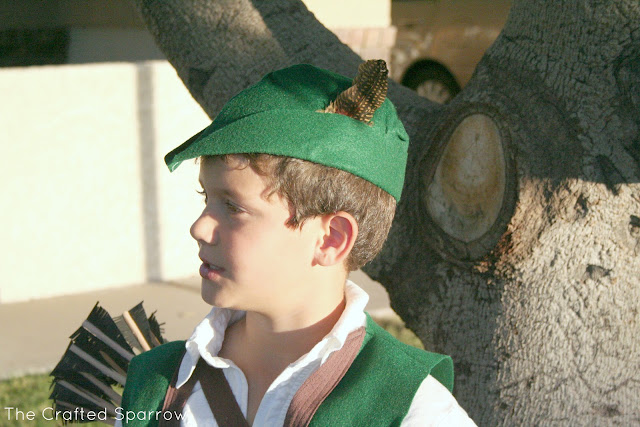 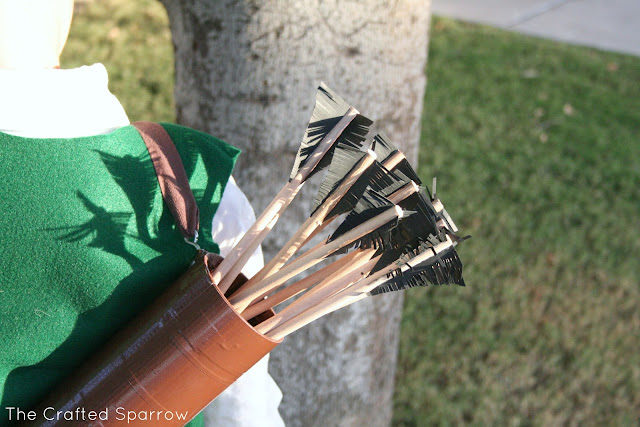 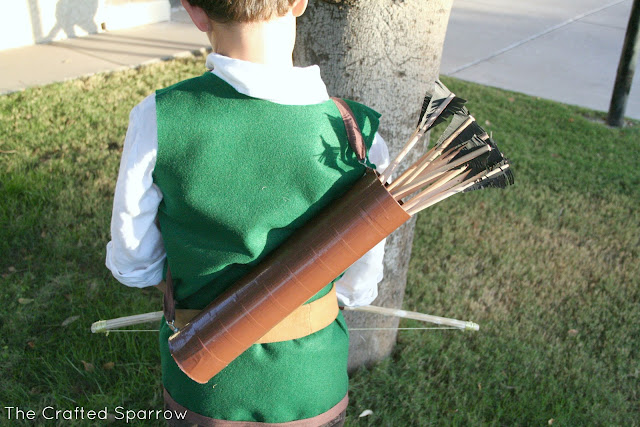 Little John’s costume has the same components as Robin Hoods.  Pants and shirt were actually from the little girls department at Goodwill, couldn’t find anything in the boys stuff that was the right colors or that would work. The shirt was originally a brown henley that I soaked in bleach to turn it cream.  I removed the buttons and cut some small holes so I could lace up the shirt with some left over trim I had.  His vest is the same as Robin’s, as well as his hat and boot covers.  His belt was also from Goodwill and vintage, just had to be trimmed down to fit his little waist.  He had to have a weapon too, so I found him a sword at the 99 Cent Only store. 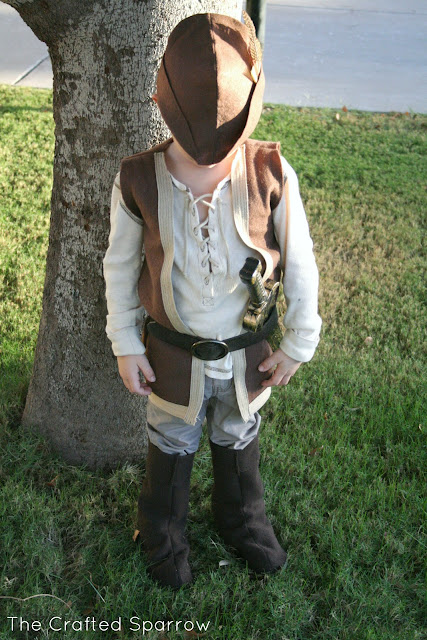 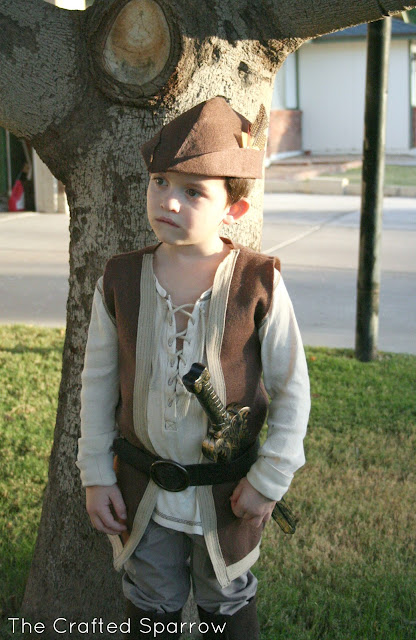 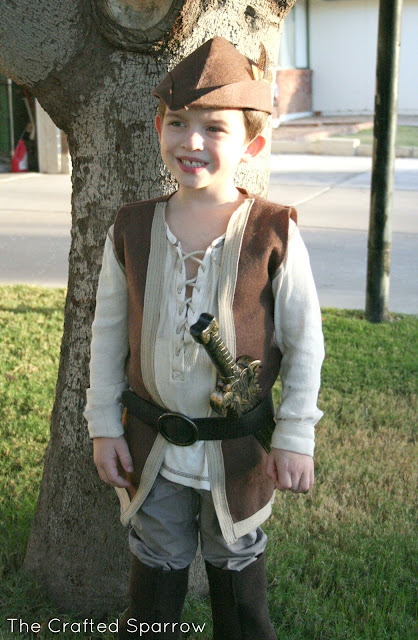 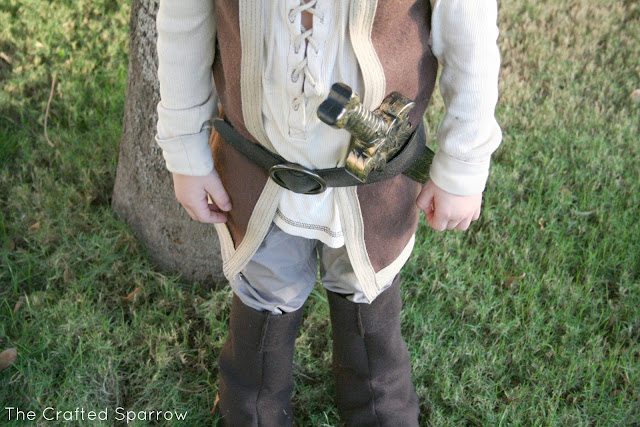 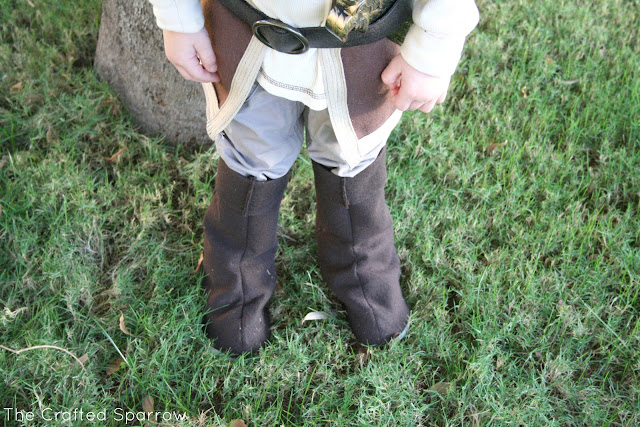 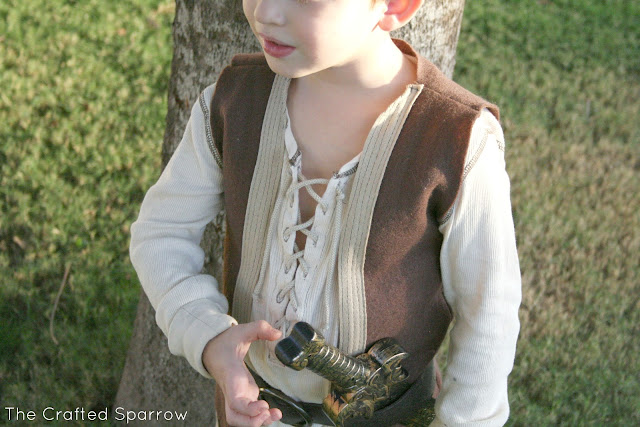 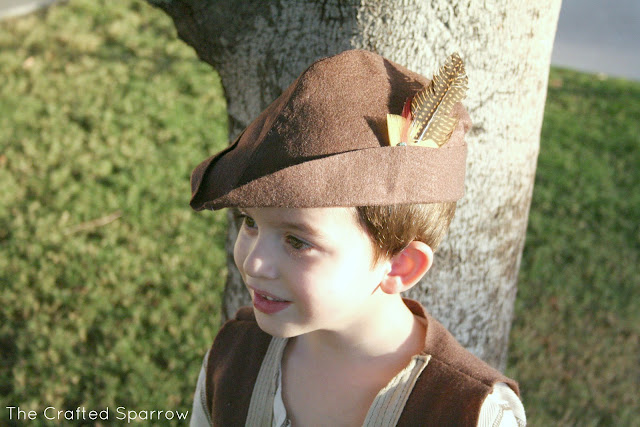 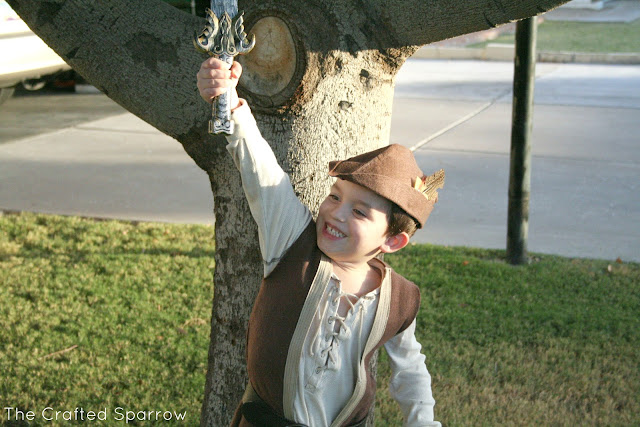 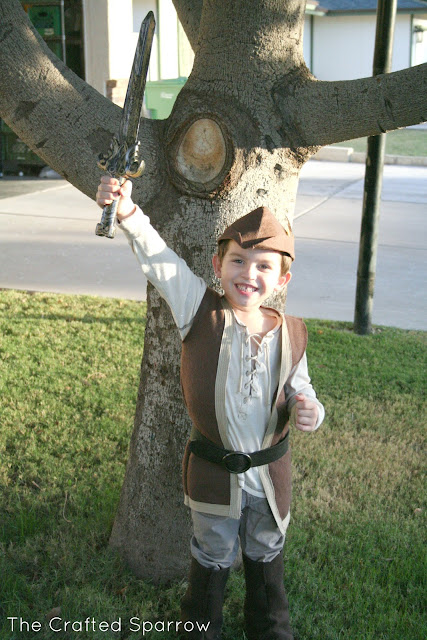 They had so much fun on Halloween, and I’m so happy that I was able to finish their costumes in time and that it wasn’t really very hard at all.  Best of all they loved it.  And now they have some outfits to have some make believe fun in.
Robin Hood hat can be found HERE.
Boot pattern can be found HERE.