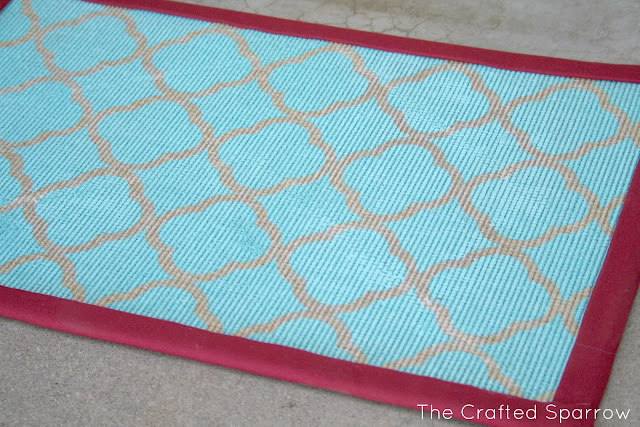 I decided to pick up an inexpensive rug from Ikea a few weeks back and turn it into a small housewarming gift for one of my dear friends who just bought a house {I’m going to pretend she isn’t going to read this post today and it will still be a surprise!}.  I found this small doormat style rug in the clearance section of Ikea for a few bucks, normally I think they are $5.  It is the perfect palette for this kind of project…except for one thing…when using freezer paper stencils like I did the iron melts the rug a bit.  So that made it a bit tricky, but if you have a normal stencil that will probably work perfectly too.

First I printed off this quatrefoil stencil pattern that I found on Pinterest.
You can print this pattern out HERE and use it like I did to piece it together on freezer paper to make a larger stencil.  The stencil pattern originated from this post at Tatertots & Jello.
WARNING:  Yes I did this by hand, and used an xacto knife and it took me forever…and I may have even suffered a cramp in my index finger from holding the knife.  It would work better with a silhouette I’m sure!
Obviously I made my freezer paper stencil to fit the inside of the doormat, once I finished cutting it out I ironed it on the mat.  I used a piece of wax paper on top of the stencil while ironing since the iron started to melt the acetate that is in the mat.  Make sure whatever stencil you choose to use is on well before painting.
{note:  ignore the numbers on my stencil, it was late and I thought I should number all the pieces that I was cutting out so I know where they were to go back.  Then I realized I didn’t even need those pieces, duh!}
This is the before picture of the mat.  It’s measurements are 2′ x 1’4″.  It’s called the Hessum Door Mat. 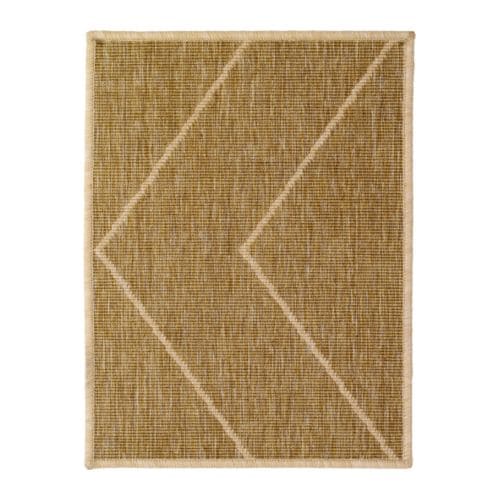 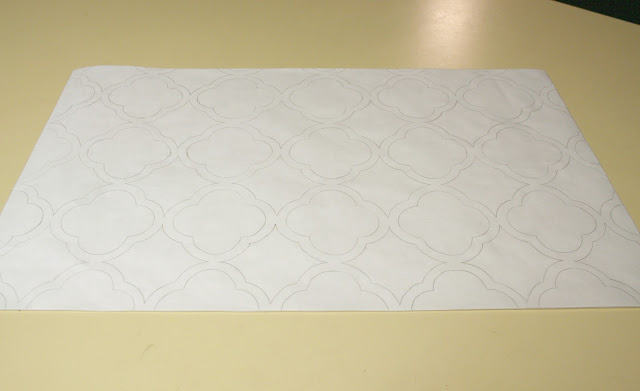 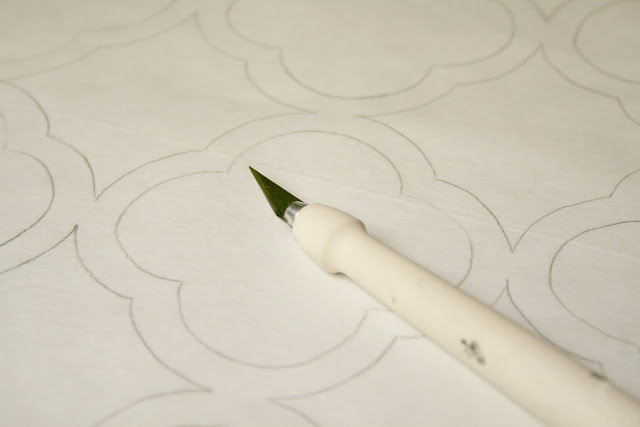 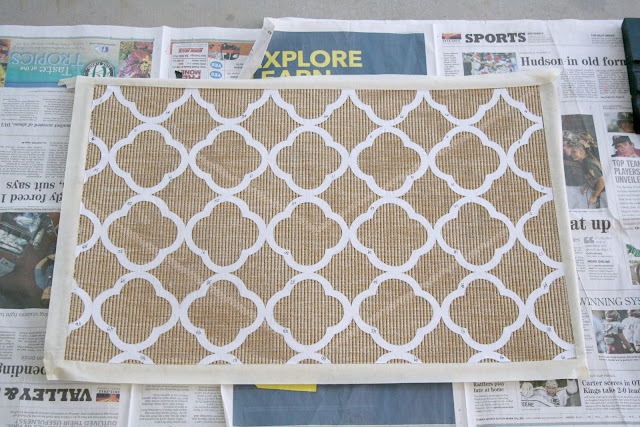 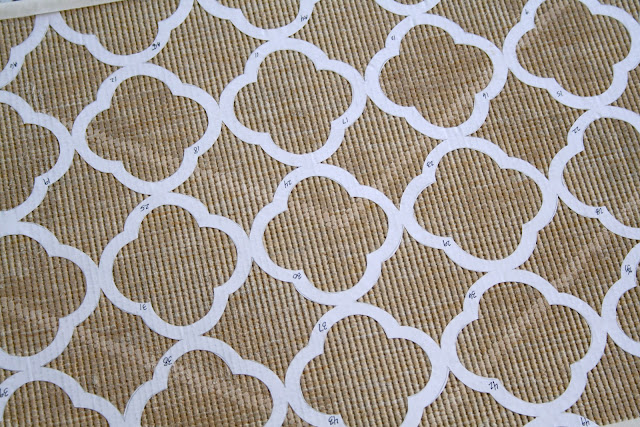 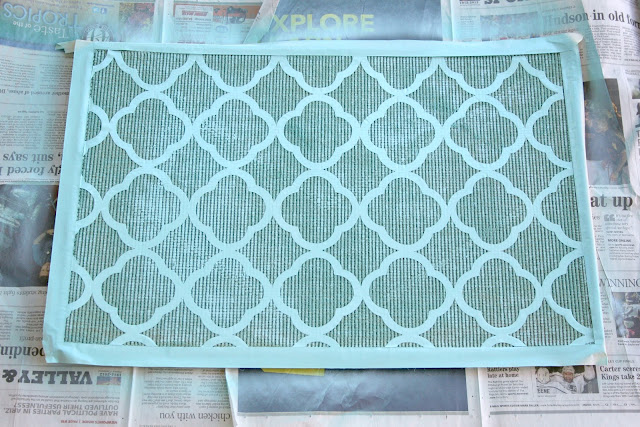 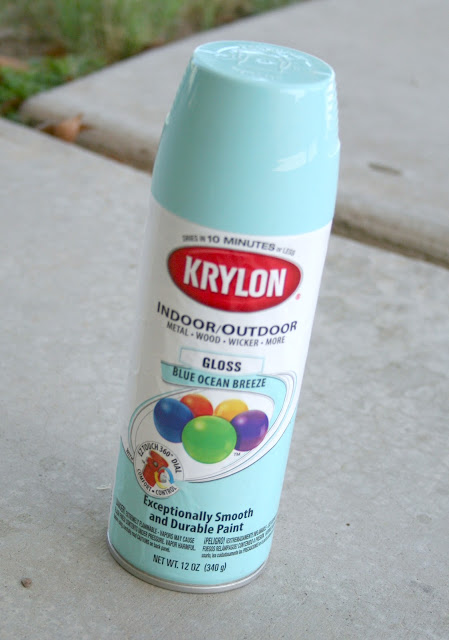 When you paint the mat, you can use either normal latex paint or spray paint…probably would work nicely with acrylic paint as well.  I chose to spray paint on mine.  I had a nice turquoise left from another project, it is a perfect summer color.  I originally taped off the trim on the edges of the mat, but once I spray painted it some of the paint had leaked through the tape.  I ended up having to paint the edges too. Which was a huge fail!  They ended up looking dirty due to whatever binding material they used not soaking up the paint right.  Such a bummer.  So late last night I ended up searching the house for something to create a new binding with.  I had some red canvas and just created some using my iron and glue gun.

Even though I had some mishaps with this project I still ended up with this super cute door mat for my friend and I hope she loves it.  I think it turned out cute, and other than my rather time consuming stencil it was easy to do!  It just happens to be perfect for 4th of July too. 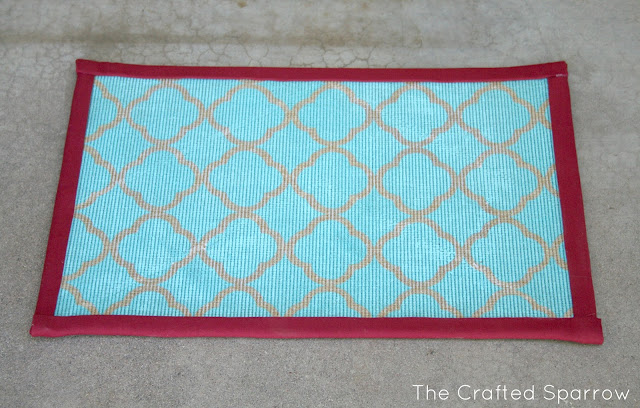 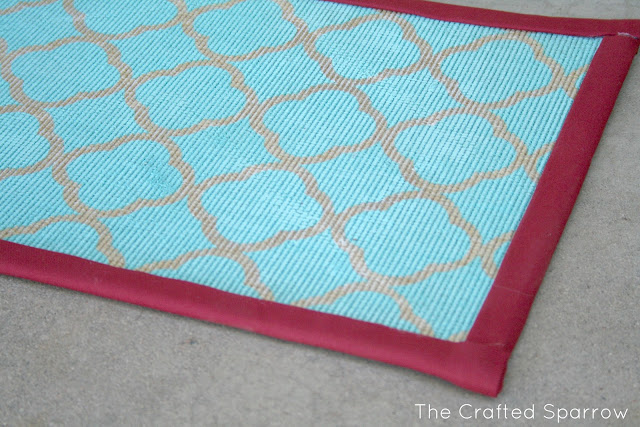 Linked up at:
Today’s Creative Blog